How And When To Transplant Cannabis Seedlings

How And Why To Create Homemade Organic…

Can CBD Help With Nicotine Addiction?

How To Prevent And Fix Root Bound…

CANNABIS CULTURE – YouTube has been under scrutiny recently for a number of reasons. In response to advertisers complaints, they demonetized many channels with an Adpocalypse. Next, they implemented algorithms that affected organic reach. Then they started squeezing out content that isn’t ad friendly. All of these actions taken were reactive, but it is important that they step in to moderate. When a platform hosts and even promotes things like terrorism videos, and footage of a dead body, something must be done. Or must it?

Squeeze out the Terpenes

The purge also dramatically cut back on cannabis content that was floating out there. Educational and uplifting content from channels like US-based Leafly, Spanish channel Marihuana Television, and Canada’s Urbanremo got the boot, even Cannabis Culture’s own Pot TV was affected. Then it trickled down to channels with fewer followers. Channels and content are being kicked off the goliath viewing platform to this day, but there are still some rays of hope out there.

Max Simon started Green Flower Media (GFM) in 2015 with a mission to spread trusted cannabis content around the globe. Providing expert knowledge, information, and the truth about cannabis, GFM de-stigmatizes the plant by sharing how it changes lives. His videos on YouTube were behind a membership wall. As a result of suddenly being shut down by the behemoth, GFM made a portion of their ensuing internal platform free to the public.

GFM is already accepting content submissions from the general public, but anything aired must strictly align with their mission. 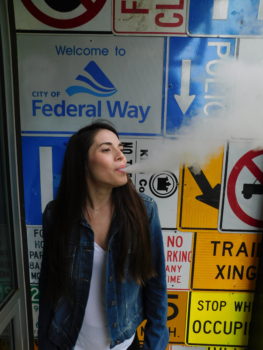 Ashley Positive Smash started her Washington State-based cannabis video content in 2016. A lonely stoner who found community in the audience she built online, at one point she was practically making a living off her YouTube monetization. “YouTube really brought a lot a joy to me! It was the social life that I didn’t have.”

Up until two weeks ago she was still bringing in the bills. Her channel just got shut down with 150,000 subscribers. Where’s her content hosted now? She has loyal subscribers who have followed her to Patreon and maintains regular content on Vimeo, Instagram, Facebook, and Snapchat.

She claims YouTube lost the vision. After receiving the first strike on her video content, she had no problem with age-restricting her content going forward. Next she knew, her content and 4,000 subscribers were gone. Sarah is disappointed in the direction YouTube is headed.

Can CBD Help With Nicotine Addiction?

What Are Cannabis Flavonoids And What Do They Do?